She has long blue hair which is straight, and hazel colored eyes.

A teenage girl who often runs away from school. Cold and stoic, and is very antisocial. Loves to listen to music, and eat rice products when she is hungry. Her parents divorced after her little brother died in an accident. She loves classical music, and she once watched one of the concerts Takane Shijou was in. She idolizes Takane Shijou.

The queen of the Frances Kingdom. She is the descendant of the original hero, Chihaya Kisaragi (she is Queen Chihaya Kisaragi XII in this story). She has a very elegant kimono as her queen outfit. All her power resides in her scepter, which was passed down from generation to generation. She is said to be one of the most famous queens of her world, the Nippon world.

A teenage girl who is known for her singing. Although she seems cold and stoic at first, she actually has a cool personality if you get along with her instead. She loves listening to music, and singing!

Chihaya Kisaragi XII, the queen of the Frances Kingdom has finally arrived as a Rare card! The descendant of the famous hero, Chihaya Kisaragi, is known for her powers, temper, and victory streak! However, her weak point is her scepter, which if you take it away, she's basically powerless.

Chihaya Kisaragi XII is the queen of the Frances Kingdom who is the descendant of the original Chihaya Kisaragi. She is known for her powers, and is very strong and powerful and most likely will kill you.

A chibi of Queen Kisaragi XII. Base by VIV-I. 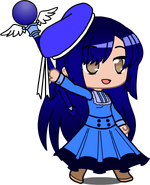 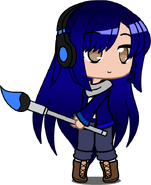 If Chihaya Kisaragi were in idolmaster.

Art done by Svala on Sketchmob.
Add a photo to this gallery

Retrieved from "https://ayumus-gacha.fandom.com/wiki/Chihaya_Kisaragi?oldid=397"
Community content is available under CC-BY-SA unless otherwise noted.